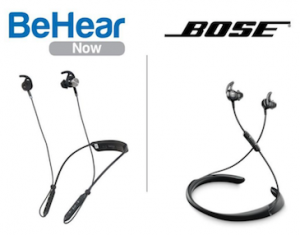 ♦ Bose Hearphones were introduced in 2016. They feature active noise reduction, directional microphones, Bluetooth audio and call streaming, smartphone app control, and more. But with the hearables market heating up, there are now multiple alternatives to consider, some of which offer similar technology at a lower price point.

Alango’s BeHear NOW headset, launched in 2018 by Alango’s Wear & Hear (W&H) assistive products line, is the most noteworthy Bose Hearphones alternative. Both the Alango and Bose headsets aim to enhance hearing, and both support Class II Bluetooth connectivity. And because both use an in-ear neckband form factor, they are strikingly similar in appearance.

“But with BeHear NOW coming in at just $249 (versus $499 for the Bose), price is a major differentiator between the two.”

And aside from price, there are a number of key differences to consider when comparing the Bose Hearphones with Alango’s BeHear NOW. To read the entire comparative article, click here.

The BeHear NOW headsets are available for purchase from our on-line store (along with the HearLink assistive listening transmitter). For bulk purchase pricing, contact us here.

Hearing Tech Expo the largest consumer hearing health fair in the country (outside of the HLAA National Convention). The 8th annual Expo is scheduled to take place on Saturday, February 15, 2020 at the Manatee Technical Institute in Sarasota, Florida. Sarasota is one of the most hearing friendly cities in the US and the world with 120 major theaters, meeting places and houses of worship equipped with a loop system. Attendees are invited to visit the Alango - Wear & Hear booth to try and compare our personalized hearing amplification solutions. Manatee Technical Institute, Sarasota, Florida - Saturday, February 15 9:00 am - 3:00 pm

Future Health showcases the significant advances being made around the globe and inspires professionals to be progressive in their approach to the challenges we face. The event brings together government and policymakers, innovative products and solutions, and a global network of buyers and professionals. We are proud to participate as innovators in this space with our disruptive hearing enhancement products. ExCeL London - March 17-18