What is the typical range of Bluetooth? Can I get up to go to the kitchen or bathroom and stay connected?

Bluetooth range for Class II devices like our BeHear NOW and ACCESS headsets is up to 10 meters (~33 feet). This holds true even if you leave the room. Note: There may be interference from other electronic devices or objects which will affect that range.

Bluetooth connection is not stable during phone calls.

In this case we recommend placing your mobile phone in front of you or in your hand, but not in a tight pocket or otherwise pressed against your body, as the body blocks the Bluetooth signal.

When pairing BeHear via Bluetooth with my computer the device shows both “headset” and “headphones” entries. Which should I choose?

Oftentimes, when you connect BeHear to your computer, you will see two BeHear entries: one as Headphone and one as Headset. For best results we recommend the following:

How do I pair the headset to my phone? 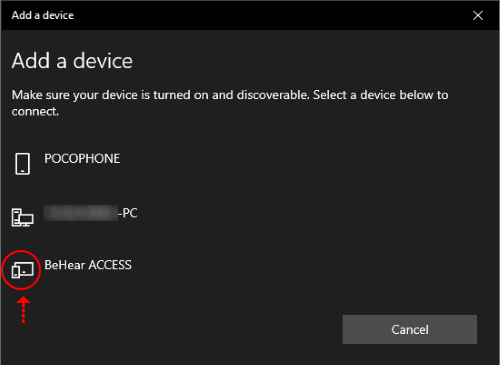 My BeHear headset is not pairing with my laptop computer.

Make sure that the Bluetooth option on your computer is set to “on”. This option is usually found in the “Settings” section, “Bluetooth and Other Devices” sub-section.

On Windows computers you can quickly access the Bluetooth settings from the action center in the system tray. 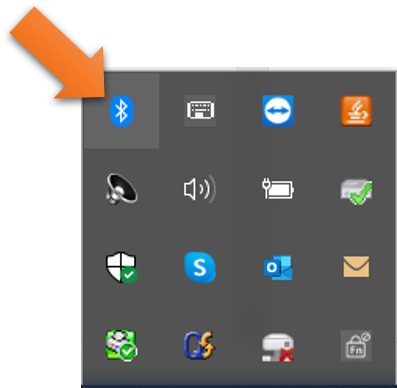 If you don’t see the Bluetooth icon here it may be an indication that Bluetooth is not active. In this case, go to the computer Settings → Devices and make sure the Bluetooth switch is ON. If it is not, slide it to the right to activate Bluetooth.

I cannot find an audio output jack for the HearLink on my television.

Can I connect BeHear to my tablet?

The app’s Home menu button is grayed out.

A grayed-out Home button indicates that the headset is not connected to the app. Go to Settings->Connection and verify that the headset is in the Paired Devices list. If you don’t see the BeHear device in the list you’ll need to pair it — see the video links below for instructions.

When the headset is connected properly a checkmark will appear. If there is no checkmark, tap the name of the headset in the list of Paired devices to re-connect the headset. Another way to reinstate the connection is with a short press on the headset’s Power button. For more information about pairing your headset with the app, watch these videos:

Can BeHear headsets pair with more than one Bluetooth device?

Absolutely! BeHear headsets can support multiple audio sources simultaneously. For example, you can listen to media on your laptop, and still be connected to your mobile phone.

For each additional Bluetooth device you would like to link to the BeHear headset you will need to perform the pairing procedure (placing the headset into “Pairing Mode” by turning it OFF, and then pressing the power button for several seconds until the LED flashes red/blue).

The BeHear NOW and BeHear ACCESS headsets are Bluetooth Class II devices, while the HearLink PLUS is a Bluetooth Class I device. As a result, you many wonder what kind of transmission range you can expect with this product combination. Here is a detailed explanation:

What kind of range can I expect from a BeHear headset when used with the HearLink PLUS transmitter?

The Bluetooth version in BeHear headsets is v. 4.2 and in the HearLink PLUS it is v. 5. However, the range depends on the class of the Bluetooth device (Class I or Class II) rather than on its version (v. 4.2 or v. 5). BeHear are Class II devices while HearLink PLUS are Class I. Operation range between these two devices is larger than for two Class II devices (10m or 40ft) though less than for two Class I devices (100m or 400ft). We expect that for the BeHear + HearLink PLUS combination you can get a 20m or 80ft range, in open spaces.

The current versions of both our headsets (BeHear NOW and BeHear ACCESS) support both the Qualcomm aptX “classic” and aptX-LL (low latency) codecs.

What can I do when my HearLink transmitter loses connection with my BeHear headset?

If that is not the issue, and a long time has passed between uses, or if the smartphone has been playing an audio stream, the headset may not automatically reconnect with the HearLink or HearLink PLUS transmitter when you are within range. In this case, a short press on the headset’s Power button should re-establish the connection with the transmitter.

For each additional Bluetooth device you would like to link to the BeHear headset you will need to perform the pairing procedure (placing the headset into “Pairing Mode” by turning it OFF, and then pressing the power button for several seconds until the LED flashes red/blue). You should see the BeHear headset in the “Audio Devices” section of the Bluetooth pairing screen.

For more information, view one of these videos:

Where does the BeHear headset appear in the Bluetooth device’s pairing screen?

Get updates about the features, prices, and availability of our assistive hearing solutions.

The 6th Biennial MEDinISRAEL Conference and Exhibition, which brings together companies from the Medical Devices and Digital Healthcare fields, will be virtual this year. The Israeli medical landscape represents a broad spectrum of companies which offer diverse medical products and…